The Truth About Poultry Farms in Australia 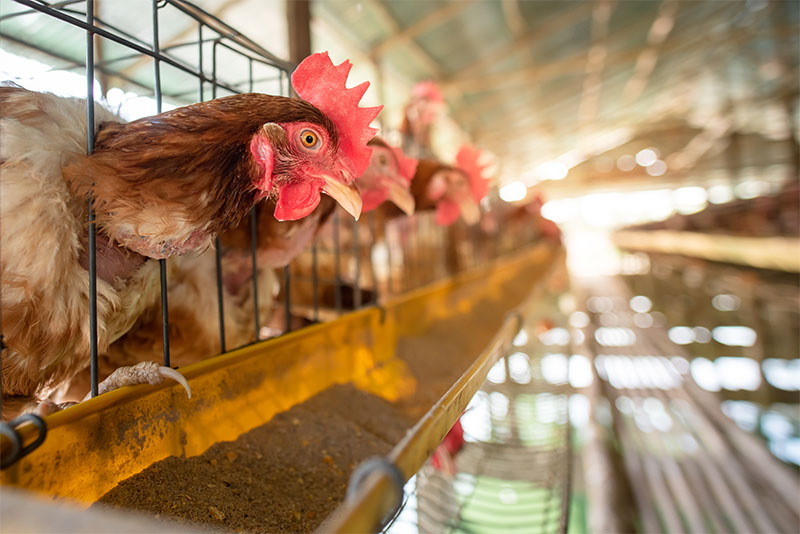 Nearly 500 million chickens are killed every year in Australia. Not only are they bred purely for the purposes of human consumption, and their lives cut short because of this, but the moments that they do survive are filled with torture and suffering.

Although many poultry businesses label their products as being ‘cruelty free’ or ‘free range’, this isn’t always the case. Most Australians are unaware of the reality of local poultry farms and the cruel activity that takes places in them.

In this blog article, the crew at The Kind Path hope to enlighten our followers on the reality of poultry farms in Australia. Before we begin to describe the awfulness and seriousness of the situation, it is important that we mention the aptitude for change. We strongly encourage you to stay positive and adopt forward-thinking. Although there are obvious issues right now, our efforts and united strength can make a difference in the future.

Bearing that in mind, let’s get to the facts.

What happens in a chicken farm?

Recent investigations into some of Australia’s largest chicken meat suppliers have demonstrated that animal cruelty certainly does exist in our country. Many Australian poultry farms are breeding, housing and killing their chickens in inhumane ways. The treatment given to chickens in these farms is concerning and revolting. It might be hard to believe, but this is the truth…

Firstly, the breeding of chickens in Australian farms is cruel. In most farms, the chickens are confined to small cages amongst other birds and forced to lay eggs in uncomfortable and unnatural manners. Once the eggs have been laid, they are sometimes immediately removed from the mother. Alternatively, they remain with the mother, but are then immediately removed after the eggs have hatched. Either way, the unsatisfactory environment causes deep distress for both the mother and the chicks.

Male chickens are usually thought of as an ‘unwanted by-product’ in the chicken farming process. This is because they cannot lay eggs and aren’t appropriate as chicken meat. Hence, male chicks are killed and disposed of shortly after hatching. In some cases, this means being crushed to their deaths by machinery and then being disposed into rubbish. In other circumstances, the farmers may leave them to die in confined spaces, with toxic gas encouraging their death. The process of removing and disposing of male chicks can be referred to as chick culling or unwanted chick killing, and it should be noted that the killing of male chicks takes place regardless of the farm type (including caged, organic and free range). As they are only newborns, the chicks have no opportunity to escape or defend themselves, and they never have a chance to live a normal or fulfilling life.

On the other hand, female chickens are sought after by the farmers. Assuming they are healthy, female chicks are immediately transferred to laying facilities or meat production facilities after they have hatched. If they are to be used for egg production, they will often be placed into a cage, where they spend the rest of the life, forced to continually produce eggs. Alternatively, they will be used for chicken meat, which means they will be placed on a conveyor belt (often while still alive) and rolled into machinery that will chop and slice their bodies into pieces. It is a brutal death.

Understandably, mistreatment of chickens in farms can result in many health hazards for them, regardless of the age. As well as being crammed into tiny spaces, they are fed cheap and unhealthy food that doesn’t allow them to feel full nor satisfied. Heart disease is extremely common for chicks who are locked in poultry farms, and most chickens will suffer ongoing hunger and thirst.

Here’s a summary of what we know about poultry farm cruelty in Australia:

What can you do about animal cruelty in Australia?

Hearing the facts and truths about animal cruelty can be very mentally challenging. If you are feeling sick after reading the above information, you’re not alone. It’s normal to have a negative reaction towards animal cruelty, and most people will feel disgusted or upset when they learn about the current cruelty that is taking place.

Unfortunately, many people believe that animal cruelty isn’t something that happens in Australia. Even when hearing facts or seeing footage, they automatically assume that the information is related to international farms and abattoirs where there are less regulations and different cultural morals. Hence, when the learn about the cruelty taking place so close to home, they are extra shocked and saddened by the realities.

We want to re-assure you that, although the situation is upsetting, there are things that you can personally do to help stop animal cruelty. At The Kind Path, we are firm believers that every individual has the ability to make a difference. It is important that we remain positive and keep the faith that change can be made. Our positivity, bravery and compassion is what will allow us to achieve great goals as a vegan charity. A new, better world starts with us!

If you don’t know where to start or what to do to help stop animal cruelty in Australia, here are some simple tips from our team.

Your first action should be to join one of the best animal charities Australia. Organisations like The Kind Path are taking action wherever possible to end injustices in our society. Currently, our vegan charity is focused on educating and informing the public about animal cruelty.

By joining a vegan charity Australia, you will be able to meet likeminded individuals and express your thoughts and feelings with people who really understand you. It’s a great way to share your passion and build upon your knowledge of veganism and animal cruelty. Plus, you’ll get to make a real difference by working with a united force.

If the public stops eating eggs and chicken, the poultry farms will have no more reason to continue breeding and mistreating chicks. Truthfully, the fate of chickens is in our own hands, and as a society, we have the ability to run cruel farms out of business. The best way to show the egg/chicken industry that you aren’t willing to put up with animal cruelty is to reduce your egg intake, or remove them from your diet altogether.

By consuming meat, you are helping abattoirs and cruel animal farms in Australia to thrive. Choosing a vegan diet is one step further and better than eliminating eggs and chicken from your meals.

According to some statistics, the average person could eat around 7,000 animals in their lifetime. That includes a range of different meat types, but mainly cows, chickens, lamb, and fish. Other figures suggest that more than 200 million animals are killed every day for the sole purpose of human consumption. These numbers are not only alarming, but they are unsustainable for our planet. By adopting a vegan diet, you can reduce the number of animals being killed and save the lives of thousands over your lifetime.

Admittedly, choosing a vegan lifestyle isn’t always easy. Although it comes with many benefits, including healthier human bodies and a healthier planet, committing to vegan meals can be challenging for some people. If you would like to become vegan, we recommend reading our recent blog article detailing the best tips for going vegan.

The Australian Government has not done enough to stop animal cruelty. Currently, the laws relating to farming are weak and ineffective, plus they aren’t being strongly enforced. By working with vegan charities and animal charities in Australia, you can join protests and activist events, which draw attention to the issue. With enough manpower, this activism may encourage our Government to make a change for the better. We suggest following The Kind Path online to hear about any upcoming events that our crew may be hosting.

Unfortunately, much of the animal cruelty taking place in Australia happens behind closed doors. As expected, poultry farms are very secretive and closed-off to the public. They are good at hiding their mistreatment to chickens. In order to get facts and truly understand what is happening at poultry farms, the top charities in Australia need support from the community. Most charities will feature a donation button on their website, but you can also donate to their causes at charity events and functions.

If you are unable to support a vegan charity financially, you can offer your time or skills to one of their causes. Charities like The Kind Path are regularly hosting events and working on projects, and volunteers are essential for making progress on these activities. Browse our website to find more about our current and ongoing projects and events.

What is The Kind Path?

The Kind Path is a progressive vegan charity in Australia. We are comprised of passionate and positive people who care about animals and the environment, and want to create a more sustainable and moral society. Our unique projects and events make us one of the top charities in Australia, and one of few animal charities Australia.

Our main goals are to promote veganism, raise awareness of animal cruelty, and provide environmentally friendly assistance to displaced people in Australia. As an active Australian charity, our other primary focuses are:

We are always on the hunt for enthusiastic volunteers in the local area. In order to make a difference in our world, we need support from the community. As we are currently based primarily in Sydney, we would love to hear from people in the Sydney metro area who are willing to put in some hard yards and assist with our latest vegan charity events and projects.

If you would like more information about The Kind Path, you can learn about us on our About Us page. You can also view our current vegan charity projects and vegan charity events on our website. To express your interest in becoming a volunteer for our charity Australia, you can contact us today.